Despite the current challenges related to the Covid-19 situation, we are still able to process our online orders with minimal or no delay. Please call us at (705) 444-4447 if you require additional information on a particular product. Kaydan thanks you for your patronage and please stay safe!

> All Blog News > Ontario Government Autism Reforms make an already difficult problem much worse for everybody.

Ontario Government Autism Reforms make an already difficult problem much worse for everybody. 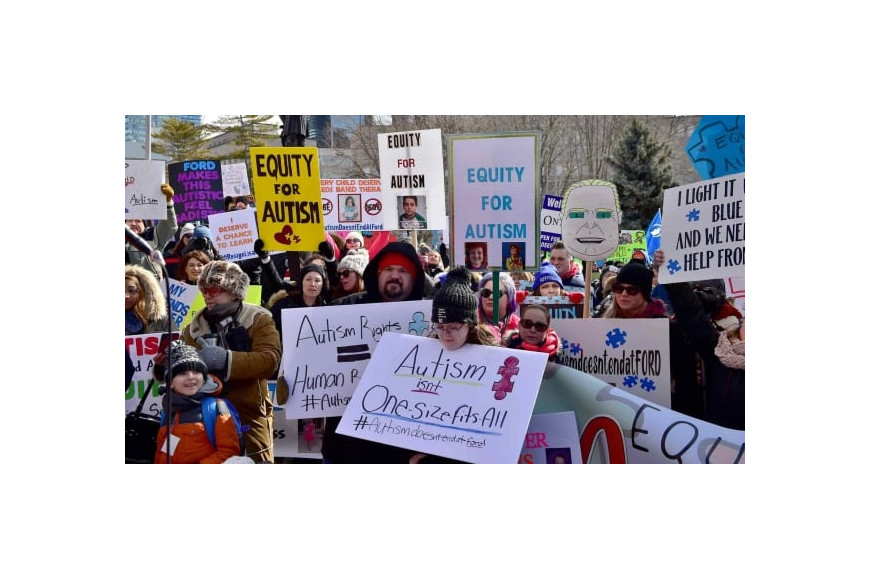 First, lets point out IBI (Intense Behavioral Therapy) has worked for us. Quite simply our recently turned 7 year old son has been on a IBI program on a part time basis (3.5 hours per day) for just around the last year and a half. In that time he has gone from being virtually nonverbal with toileting issues to being talkative, receptive and mostly toileting independently. The changes in him during this time have been tremendous, but there is plenty of work to be done to have him integrated into a normal classroom setting with his peers. At his current pace this may take another two years of therapy at the least – according to doctors and professionals working with him.

The research provided indicates that early, intensive treatment based on the principles of applied behaviour analysis facilitate clinically significant gains in intellectual and adaptive functioning for many children with autism. In the seminal study of IBI and ABA therapy almost half of the participants made substantial gains on standardized tests that measure cognitive ability and later functioned successfully in mainstream classrooms and were often indistinguishable from normally developing children of the same age, although, admittedly some children make only modest or even in some cases no progress.

So while it’s not 100% affective, it should be left to doctors and qualified personnel to decide what each individual child needs. If they decide 30 hours of therapy is needed or if therapy is not working in those certain cases then it should be up to doctors to decide if treatment should be stopped. But to have a system like the one that will be introduced April 1st in Ontario that factors only one variable to decide treatment is madness. The criteria they use isn’t based on individual need, but based only on, is the patient under 7 they get a little money for treatment if there over 7 they get almost nothing.

Consider the plight of parents with a child or children on the spectrum. Full time IBI therapy cost upward of $60,000 per child per year. If they are under 7 they get a maximum of $20,000 and $5,000 if they are over 7. Keep in mind these are the maximums based on parents in the lowest income brackets the vast majority won’t get close to that much. Realistically, how many working and middle class families have a spare 50 grand a year kicking around for treatment?

If you think the cost of yearly therapy is expensive you are right but consider this. Many children after a few years of therapy may be able to reintegrate back into the school system, they can graduate high school or go on to post-secondary education, but more importantly they can be employable and be able to live independently later in life. The cost of not acting while there is still time is far worse. The cost of a group home in Ontario for those left behind will cost upwards of $90,000 per year the cost to incarcerate a prisoner around $115,000 per year, so we really need to minimize the number of people on the Spectrum from either of these destinations in their adult life. Keep in mind Parents no matter how dedicated won’t always be around to help their children and many adults on the ASD spectrum can be aggressive or do self-harming and normal parents are not equipped to deal with this.

The new autism funding system will do one thing and that is clear the waiting list, but unfortunately, not in a good way. The vast majority of parents currently in the system will be financially turfed out of therapy long before their children will reach their potential. The next parents on the wait list will then get therapy for a few months or until their money runs out and so and so forth until the wait list is cleared, although this won’t actually help any of the kids involved, it sure will clear that wait list, and the current government can pat itself on the back for tackling the autism problem.

These children currently in the system including our son in a matter of months will be tossed back into a public school system that they are incapable of managing. Many of these children will then be a burden to their new teacher who is already dealing with 30 students and will become a distraction to the other students that are actually capable of learning in a normal classroom environment. We have talked to many special needs parents and they are acutely aware that their sons and daughters will be frightened and will be shut down just by noise alone in a typical classroom. These new "en masse" special needs children then will be pushed out into public school hallways or quiet rooms, where they will learn absolutely nothing for the vast majority of the day, just kept out of the way. Fast forward ten more years and such children that were not given the chance to be helped and integrated into the school system when they could, will now be on social assistance for the next 50 years, as they will be incapable of undertaking any sort of future employment opportunities. Even financially this system makes no sense.

This current April 1st plan by the provincial conservative party also does nothing to address the real problem, which is a lack of qualified ABA and IBI therapists that simply bottle neck the long waiting lists. If the Ontario government actually wanted to help with the supply issue, it would offer a combination of grants, interest free loans or tax incentives or anything else they can think of to get future students into this field and increase the supply of qualified therapists as this problem is growing fast. At the turn of the millennium there was approximately 1 in 200 children with a ASD diagnosis today it is now considered to be as high as 1 in 60. Planning for future therapists would not only reduce weighting times, but it may actually lower the hourly costs of getting such treatment as it becomes more widely available.

While there's no cure for autism certain types of therapies have been proven to improve a child’s ability to function in the real world. The bottom line is children are going to be permanently damaged from these policy changes. There is no going back once these changes take effect, we will never get these formative years back, once the funding has ended and our children’s’ potential to live independent lives will be greatly reduced.